The Swabian-Hall pig is a large breed of domestic pig originating from Schwäbisch Hall in Baden-Württemberg, Germany. It is also known as Schwäbisch-Hällisches Schwein.

It was started by King George the 3, who imported Meishan pigs in 1820 from Japan to crossbred with the German Landrace breed. The main idea behind this was to increase the fat content.

The Swabian-Hall pig became very popular breed by 1959 and counted about 90 percent of the total pig population in Baden-Württemberg. But their popularity declined in the 1960s.

Their popularity declined as the markets preferring leaner pork with less fat. The enthusiastic farmers kept some animals in the Hohenlohe district. By 1984 total numbers of these animal were down to only seven breeding females and only two males.

Meat of the Swabian-Hall pig is darker, have strong and distinctive flavor and today the breed has a high reputation amongst gourmets.

The Swabian-Hall pork is a name with Protected Geographical Status in the European Union since 1998. And only the pigs coming from the Hohenlohe, Swabian Hall and some adjacent districts can be sold under Swabian-Hall pork name.

Currently there are around 1500 registered sows of this breed, and all of these are from farms belonging to the Farmer Producer Association of Swabian Hall.

An association for the breed was formed in 2007 named The Swabian-Hall Breeders Association. Read more information about the breed below.

Swabian-Hall pigs are large animals. They have white in the center with a black head and rear and narrow grey bands at the transition from white to black skin.

Average height of the mature Swabian-Hall sows is around 80 cm, and around 90 cm for the boars.

Average live body weight of the mature boars is around 350 kg. And the mature sows on average weight around 280 kg. Photo and info from Wikipedia.

The Swabian-Hall pig is a very hardy breed of pig. It is usually a long-lived animal. The sows have very high fertility and their litters averaging more than 9 piglets.

The Swabian-Hall sows are excellent mothers and they produce enough milk for their piglets. However review full breed profile of the Swabian-Hall pig in the following chart. 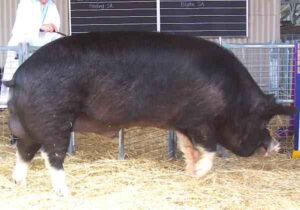 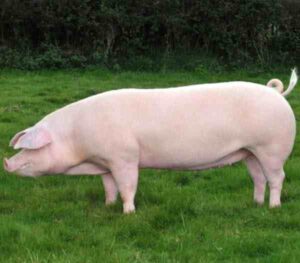 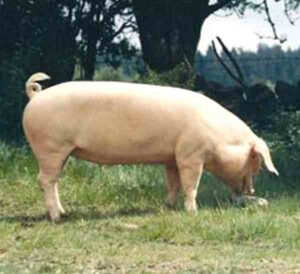 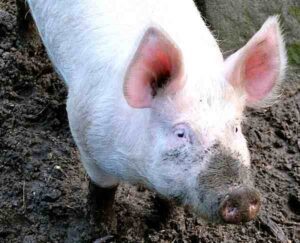 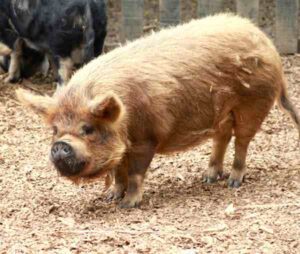