The Rex rabbit is a European breed originated in France in 1919. It was mainly developed to have short dense plush velvet-like fur. A litter of wild gray rabbits was the origin of Rex rabbit. And since then it has been developed over the years by the rabbit fanciers and the fur industry.

The breed is named for the rex gene responsible for it’s unique type of fur. Usually normal rabbit fur is made up of a shorter undercoat, interspersed with longer guard hairs. But the fur of the Rex rabbit is the result of a genetic mutation causing the hairs to be all the same length, giving a plush texture like velvet.

Naturally mutations occur quite frequently in the wild, and many breeds result from a mutation that is fixed through a selective breeding programme. Rex rabbit’s origin was a litter of wild gray rabbits. At the Paris International Rabbit Show in 1924, the Rex rabbit was first shown publicly.

Then it has been recognized as a standard rabbit breed in some parts of Europe since 1925. Rex rabbit was first imported to the United States in 1924 following the Paris International Rabbit Show. The breed became very popular in many countries as both a fancy and a commercial breed.

Rex rabbit is a medium sized breed with a commercial, solid-looking round body. Compared to other rabbit breeds, the Rex rabbit has a slightly broader head, proportionally smaller feet, and proportionate upright ears. Rex rabbits have short and soft hair (about 1.25 cm long).

Their coat is dense, smooth and level with a firm, plush texture. They have strong legs and curly whiskers. Their average body weight is about 3.4-4.8 kg, although the does can weight as much as 4.8 kg.

Usually, the Rex rabbit is mainly raised as a show rabbit or as pets. Some people also raise the Rex breed for fur and meat production. American Chinchilla rabbit and the Standard Rex are two of the most popular breeds for fur production.

The Rex rabbit is a breed of relatively calm temperament and generally very good in nature. They are very maternal and often mothering other rabbits. So they are often used as a foster mother for their excellent parenting skills.

They are very active (especially most active at night and in the morning). They are very intelligent and can be trained easily. They are affectionate and enjoy human company. That’s why they are very good for raising as pets.

They can be quite boisterous and playful, but are usually good with children and other pets. They require less grooming and can easily be cleaned by wiping over with a damp cloth if necessary. The average lifespan of a properly cared Rex rabbit is about 5-6 years. Review full breed profile of this rabbit breed below. 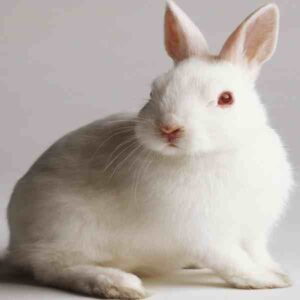