The Bombay Duck fish is despite the name, is not a duck, but a lizardfish. It is also known by many other different names such as Bummalo, Bamaloh, Loytta, Bombil etc.

Today, it is a very popular food fish, especially in the places where it is available.

The fish is known from east coast of Africa, northward from about Zanzibar, also Red Sea, the Gulf Sea and the Arabian Sea.

But it is widely found in the South And the Indian Ocean. Read some more information about this fish species below.

The Bombay Duck fish have elongate and compressed body. Their eyes are small, and snout is very short.

The mouth is very wide, armed with slender recurved and depressible teeth. And their teeth are of unequal size.

The palatine teeth are also large and depressible. Their lower jaw is generally longer than the upper jaw. They have dorsal fin with 11-12 rays, followed by a conspicuous adipose fin.

They have lateral line with 40-44 scales, extending onto pointed median love of caudal fin.

The Bombay Duck fish are generally of uniform light grey color, with a semitransparent appearance.

Their average body length is around 25 cm, with a maximum of about 40 cm. Photo and info from FAO and Wikipedia.

The Bombay Duck fish are an aggressive predator. They are mainly feed on small fishes.

This fish spawn 6 batches of brood per year. They are benthopelagic and inhabits deep water offshore for most of the year. But they also gather in large shoals in deltas of riversto feed during monsoons.

The Bombay Duck fish is mainly used for food. It is vary tasty and popular among the people of Bangladesh and India.

The Bombay Duck fish generally live in the tropical areas of the Indo-Pacific. They have been caught in the waters of Maharashtra in the Lakshadweep Sea traditionally.

And it is an important item of the yearly catch there. It is also caught in the Bay of Bengal, and in the South China Sea (although in smaller numbers).

In Maharashtra, it is mainly caught with the bag-net (better known as ‘dol’ net), and also caught with bottom trawls.

The Bombay Duck fish is a popular food item in certain areas of India and Bangladesh. Fresh fish are generally fried or cooked in curry.

It is very tasty and generally marketed fresh, dried or salted. However, review full breed profile of this fish in the table below.

People ask many questions about Bombay duck fish. Here we are listing the most common questions about this beautiful fish species, and trying to answer them. Hope you will find your answer. Don’t hesitate to ask us if you have more questions.

What is Bombay duck made of?

As you may already know ‘Bombay Duck’ is not actually from duck, but is a type of fish called ‘Lottiya’ or ‘Bummalo’. It can be eaten fresh or dried and is very popular in India and other parts of Asia, especially Bangladesh.

Is Bombay duck a good fish?

Yes, the Bombay duck is a very fishy, very strong and very salty in taste. Just one bite of dried Bombay duck fish will flood your senses with the taste and feel of ocean salt. It is a very tasty and healthy fish.

Why is fish called Bombay duck?

The Bombay duck fish got it’s name in the days of Raj, from being transported on an inconic train, the Bombay Daak, Daak being the Hindi word for mail. This charmingly misnamed delicacy is actually a fish, whose pungent odor is part of that special love-it-orhate it-Mumbai smell.

Which fish is called Bombay duck?

Harpadon nehereus is called as ‘Bombay duck’ which is of family Synodontidae. It is especially found in estuaries of northern India, where it is widely used as a food fish, and when dried, as a condiment.

Is Bombay duck a fatty fish?

Yes, but not too much. It is just like any other fatty fish containing Omega 3 Polyunsaturated fatty acids (PUFA). Fat of this fish good for health.

Bombay duck contains Omega 3 Polyunsaturated fatty acids, which are highly essential for the body. Omega 3 fatty acids in these fish enhance your heart by reducing bad cholesterol from your body and also helps in reducing blood triglyceride levels.

Does Bombay duck fish have bones?

Yes, they have! They have a single bone running along the body. They also have many small yet soft bones along the flesh. The bones can be chewed, eaten and digested easily.

Is Bombay duck easy to digest?

Yes, it is. This fish has soft and tender flesh with high water content and the bones are very soft. Even the bones can be chewed, eaten and digested.

Does Bombay duck have mercury?

Yes they have. Actually, the closer to shore the catch, higher the contamination (especially Bombay duck, Pomfret, crab and shrimp).

When was Bombay duck banned?

So beloved is Bombay duck that when the fish was banned in 1977 by the European Commission for not conforming to its hygiene laws, British businessman David Delaney fought the decision for four years to have the ban overturned.

Is Bombay duck good for health?

Is Bombay duck high in protein?

Yes, Bombay duck is one of the significant estuarine fish of the West Coast of India which is very high in protein. This fish is also a store house of important minerals apart from being rich in protein.

Yes, sure! It is a very popular fish in India. It is also found and popular in many other countries around India. For example, the fish is also very popular in Bangladesh.

You will find both fresh and dried fish in the market. Dried Bombay duck fish is available in the market. Both are very popular and very good in taste.

Fresh Bombay duck has a strong, fishy and excessively salty taste with a brittle, crumbly texture.

Yes, this fish is carnivorous and to some extent cannibalistic.

Is Bombay Duck banned in UK?

The European Commission has banned the importation of Bombay duck in a move likely to cause consternation at Indian takeaways countrywide.

What do Bombay duck fish eat?

Main food of the Bombay duck fish are prawns and small fish.

Is Bombay duck found only in Mumbai?

No, the Bombay duck is actually a fish native to the waters in and around Mumbai. But it is also found in many other places around the world.

Is Bombay duck good for bodybuilding?

Protein helps build, strengthen, repair body tissue and muscles in our body. And Bombay duck is very high in protein. So, it is a very good option for the body builders.

Is Bombay duck good for diabetes?

What are the main physical characteristics of a Bombay duck fish?

The Bombay Duck fish have elongate and compressed body. Their eyes are small, and snout is very short. The mouth is very wide, armed with slender recurved and depressible teeth. And their teeth are of unequal size. The palatine teeth are also large and depressible. Their lower jaw is generally longer than the upper jaw. They have dorsal fin with 11-12 rays, followed by a conspicuous adipose fin. The anal fin is with 14-15 rays, and the pectoral fins are with 10-12 rays which are longer than the head length. Their pelvic fins are very long with 9 rays. They have lateral line with 40-44 scales, extending onto pointed median love of caudal fin. The Bombay Duck fish are generally of uniform light grey color, with a semitransparent appearance. Their average body length is around 25 cm, with a maximum of about 40 cm. 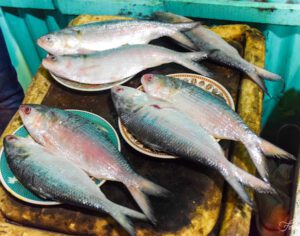 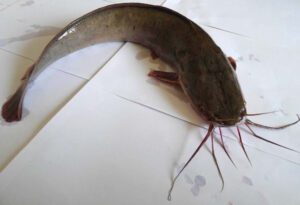 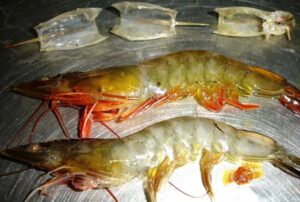 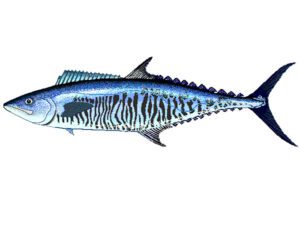 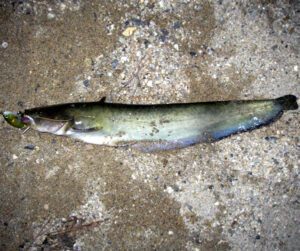 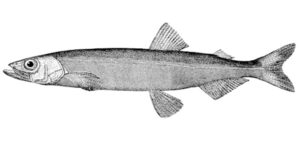