As the name suggests, the Rhinelander rabbit is a European rabbit breed originating from Germany. The breed was first developed in Germany during the beginning of 20th century. And after their development, they were exported worldwide during 1920s.

Rhinelander rabbit was very popular in Germany. But by the 1930s the popularity of this breed was decreased. Josef Heintz of Grevenbroch, North Rhine-Westphalia developed this breed and it was first shown in 1902 in Germany.

Josef Heintz had crossed a Harlequin buck to a common gray-checkered doe. One of the litter (a buck) was the first Rhinelander, having the desirable butterfly markings, orange and black markings on the chin and ears.

Josef Heintz then mated a Harlequin buck to a Checkered Giant doe. And this cross produced a desirable doe. Using the buck and doe thus produced, he proceeded to breed – keeping the best does and mating them back to Japanese bucks.

He was successful in creating the Rhinelander rabbit, and during 1905 the new breed was given a standard in Germany. The breed was first brought to the United States in 1923. But soon disappeared from there by 1932.

Rhinelander rabbit is a medium sized breed. It is known for it’s unique butterfly markings on it’s face. The breed is also known for it’s distinctive coat pattern.

The unique butterfly markings are usually orange and black, on a white backdrop. It is an arched breed of rabbit, meaning that light shows between the body and ground when the rabbit is sitting or moving.

The legs of these rabbit are shorter and a less distinct arch than the similar Checkered Giant breed. The breed has a barrel or cylindrical shaped body, with being the same width from shoulders to hip.

Their average body weight is between 2.7 and 4.5 kg. Today, the breed is very rare and only a few numbers available throughout the world. Photo from Wikipedia.

Rhinelander rabbit is mainly kept for exhibition purposes. It is not a commercial breed but good as pet.

These rabbits are active and docile in temperament. They are very intelligent also. They are well known for being friendly, calm and affectionate. They are easily handled and great as pets.

Like most other rabbit breeds, the Rhinelander rabbits are also social. And they love company of other rabbits. Their average lifespan is about 5 to 8 years. But they can live longer in captivity and if cared properly. Review full breed profile of this rabbit breed in the chart below. 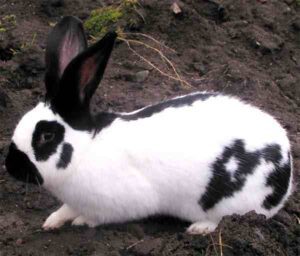 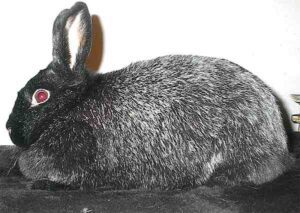 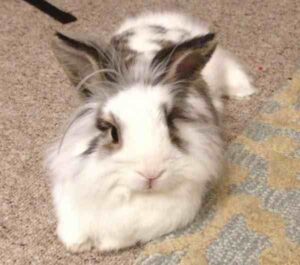 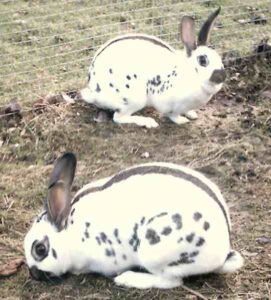 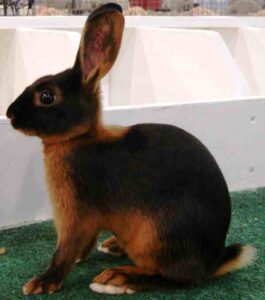 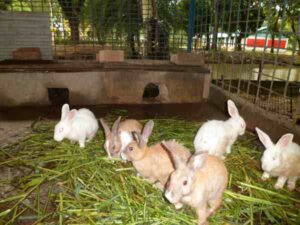